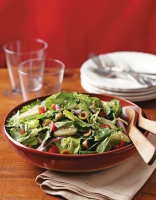 A fairly classic combination — sweet green peppers, sun-ripened tomatoes, garlic, and cucumber, lightly dressed with oil and vinegar. It owes its unusually mellow flavor to the fact that both the peppers and tomatoes are partially roasted.

From The Food of Portugal by Jean Anderson.

In Portugal, salad is a side dish and it may change slightly from north to south, coast to inland. This is&nbsp; the south of Portugal, Algarve's version that is just perfect for a BBQ and is delicious with anything you put on the grill, from meat and fish to veggies.