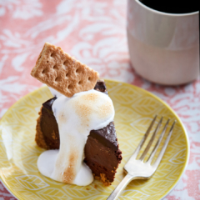 Our IP Version of THE CHEESECAKE FACTORY’S
Marshmallow S’Mores Cheesecake with Ganache Topping and Graham Crackers. One last cheesecake — and this one’s over the top. We’ve had to adapt a bit, mostly because of how the cheesecake is served in the restaurant: coated in a browned marshmallow sauce, topped with graham crackers, and served with whipped cream. Like the original, ours is loaded with chocolate (in the filling and the frosting), but we’ve revamped the garnishes a bit to make the overall preparation easier. Don’t worry: Each piece will still have a layer of marshmallow sauce on top in a bid to replicate the taste of the original and campfire s’mores.

If you’ve got a kitchen blowtorch, you can get really close to the original: Frost the cheesecake with the chocolate-and-cream mixture, then slice it into wedges. Dollop a little whipped cream at the wide, “back” part of each wedge, then stick a graham cracker (or a piece of a graham cracker) into this part. Spoon the marshmallow ice-cream topping over the top of the slice so that it runs down the sides. Now use that kitchen blowtorch to brown the marshmallow topping, giving it a golden gloss. trompette de la mort prix recettes.